Bristol was ready for another spectacular four days of hot air ballooning as the 2012 Bristol Balloon Fiesta was becoming ever closer. At this time the fiesta had what was known as the ‘100 club’, where local and national companies would put money into the event in return for a chance to become title sponsor, night glow sponsor or air display sponsor. A dinner took place at Ashton Court mansion in the summer of 2012 where the sponsors were announced at random, with Jones Lang Lasalle picking up the top spot of title sponsor. The firm decided to get a hot air balloon made of their own, which was a Lindstrand 77A registered G-CHDH. We remember this flying over Bristol on a pleasant summers evening not too long before the fiesta. It was operated by Lindstrand Media.
Heart FM Tether Roadshows
​To get everybody in the mood for the 2012 event, three tether roadshows were staged at different locations around Bristol city centre supported by Heart FM with the first of these taking place at Lloyds Amphitheatre. Kubicek Balloons’ Renishaw was new this year, operated by Exclusive Ballooning and registered G-RENI. Seeing Renishaw would become a familiar sight in Bristol every August. Bristol-built Z-105 sponsored by Cash4Cars was also new, gaining attention of the local media at the tether. 2011 title sponsors CTS also appeared. Once all four were stood up there wasn’t much space left - it does make you wonder how they managed to fit in Bertie Bassett and Velvet with fifteen others in 2002!

A very popular foreign special shape flew from this launch too. It was Woody the Woodpecker registered PR-ZKC, brought to Bristol by a Brazilian pilot and attending for the first time ever. Choc Dips also flew towards the end, which left Palletways, Blue Square and Churchill tethered.
​Later in the morning the 1998-built Jaguar Car was tethered for a short time after passing its CofA the day before. Sadly, this would be its last ever appearance at the fiesta. 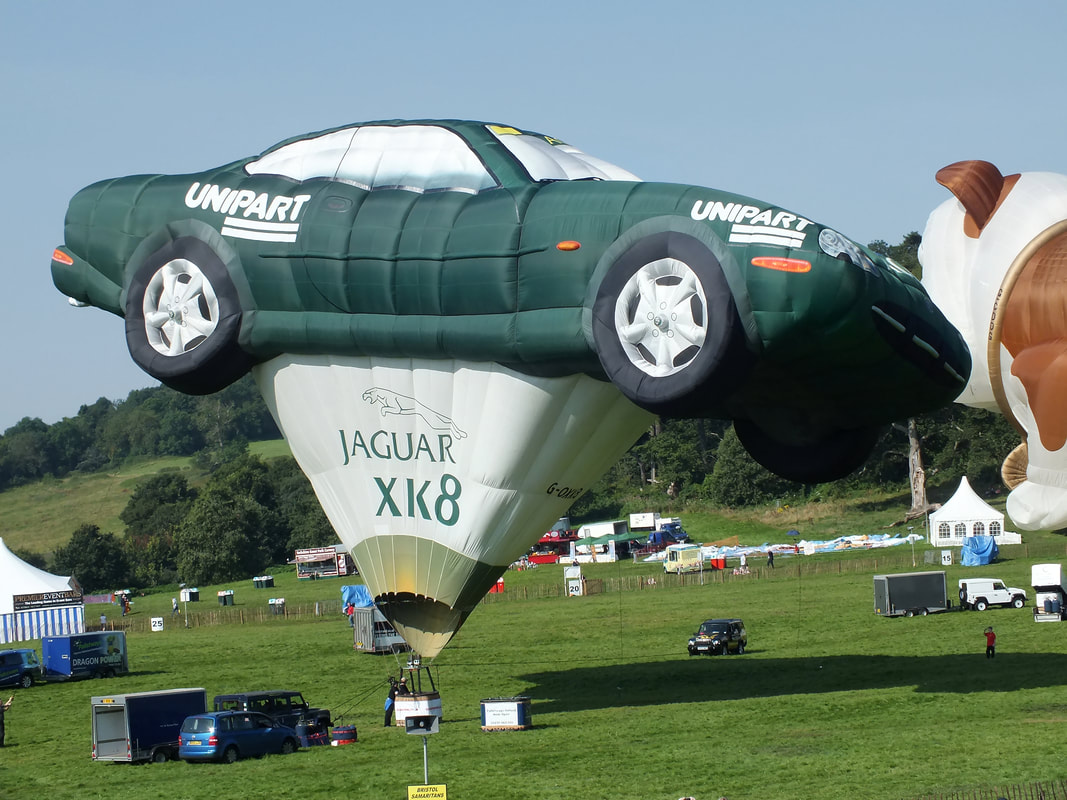 Jaguar Car photo thanks to Paul Whincup
Friday Evening
​The evening ascent was kicked off with Slick taking to the skies for his first flight of the 2012 fiesta! 102 balloons launched in total, still flying towards Nailsea, including Choc Dips, Woody Woodpecker and a yellow ride balloon sponsored by Lidl. At the very end, old favourites Action Man and Babybel took to the skies simultaneously to finish a fantastic day at the fiesta. ‘Mr Cool’ gained some considerable height whilst Action Man stayed low over the trees. An incredible moment.
​Next up was the IlluminAir display where a plane flew above Ashton Court with fireworks attached to the wings, lighting up in the night sky. So, it was a perfect start despite the wind direction with all three flights going ahead so far. However, hopes were not quite as high for Saturday morning as the wind was forecast to pick up.
Saturday Morning
​With no night glow the night before, everyone had caught up with some sleep and were back on site bright and early on Saturday to see the day’s events unfold. It was breezy, at times very gusty, and this was meant to pick up. Seventeen brave pilots decided to go for it though! First to launch was G-BXJG, an LBL 105B, just one of the many Lindstrand envelopes at the fiesta in 2012. Following were Richard Parry in Chelsea Finance, the BUHABS, Gary Davies’ G-UZLE, Derek Maltby in Visit Bristol, plus others. Surprisingly, Woody also flew this morning despite it being a special shape with some large add-ons.
​Once flying had come to an end, Lindstrand Media’s fleet tethered alongside Don Cameron, Discover Waterford from Ireland, the Trigger balloon team (now Ballooningmedia), Taittinger and The Learning Balloon. Operated by Lighter Than Air who one year later got the Paddy Power contract, The Learning Balloon was a very regular sight around Bristol in 2012, often seen flying from the bowl. The LBL 69X was later sold and registered in Austria.
Saturday Evening
​The wind continued to pick up throughout Saturday so the flying committee were forced to call off mass ascent number five. Ashton Court had reached its full capacity by 6pm and people had to be turned away at the gates. It just shows that dry and often sunny weather is not necessarily good for hot air ballooning. Winds at 500ft, 1000ft and 2000ft, plus the visibility and chance of precipitation are the things to watch. A few teams attempted to put on a show of tethering in the arena for the huge crowds, but even this proved extremely challenging.
Saturday Night Glow
​Title sponsors Jones Lang LaSalle took centre stage at the glow, which went ahead as planned as the winds dropped out.
Sunday Morning
​Nothing happened on Sunday morning as the site was hit with a bad thunder and lightning storm. Organisers were hoping that the rain would clear in time for 6pm ascent that the forecast was promising.
Sunday Evening
​The dark clouds passed at midday bringing more settled weather behind it, and hours before the evening launch was due to commence, it was officially announced that it would be going ahead on time. We were a little surprised by this as it’s usually not announced a second before 6pm or normally later. By the time 6pm was upon us the weather certainly wasn’t ideal with moderate winds at 500ft. A change of direction would take the balloons over the Clifton suspension bridge, the Downs and onto Filton, if pilots wanted to fly that far. First up was Visit Bristol followed by Exclusive Ballooning’s Book People, Cash4Cars, G-BRTV and another twenty-eight. This is when the wind really started to pick up and the remaining balloons decided to begin packing their equipment away. Ex-Somerfield envelope G-SFSL was last to fly with Virgin Balloon Flights’ A-400.
​Click here to watch Woody Woodpecker’s landing on the Durdham Downs.
Thank you to Ballooning Pictures, Ollie Warren, Liam Whitelock and James McDonald for providing photos.