The 37th Bristol Balloon Fiesta took place between 6th to 9th of August and was sponsored by St Austell Brewery's Tribute Ale. One year later they decided to get a hot air balloon created of their own, a Cameron Z-210 operated by First Flight. Above + Beyond were the charity partners attending with their Z-90 G-CIHG.
Press Launch
Lloyds Amphitheatre was the chosen location for the 2015 press launch. The evening before it was announced that it would be going ahead on Friday 31st July, after being delayed from Thursday morning due to windy conditions. Balloonists arrived at 5am and most went into the Lloyds Amphitheatre, whilst others set up on the outside. Between the amphitheatre and Millennium Square, Lindstrand Media with JLL were setting up next to ABC Flights and Snap Surveys. Around the back of the amphitheatre was Exclusive Ballooning with Puddles the Penguin, Doombar, Above + Beyond, SM Gauge and Dribuild. The friendly penguin character was created by Ultramagic in Spain and registered G-UINS. It was sure to be very popular on the fiesta weekend. Almost all of the 100 club balloons were present, except Hardys as Flying Enterprises were busy with two brand new balloons. The power ranger round balloons, registered G-GOPR and G-OPWR, were test inflated on the 23rd July and their maiden flight took place from this launch. Western Region British Balloon & Airship Club (WRBBAC) member balloons could also take part.
The wind direction was a slow easterly, so this enabled the pilots to handily land at the fiesta site, Ashton Court. The Visit Malta team landed by the car park and the Power Rangers landed stood up next to each other!
​Thursday Afternoon
The Tribute Bristol Balloon Fiesta began at midday on Thursday. We couldn't wait for a busy four days of hot air ballooning as we arrived on the opening day to watch the afternoon tethering. Weather forecasts were showing superb conditions over the majority of the weekend, but Thursday was expected to be the breezier day. The JHA Associates Balloon Team G-JHAA, which had the SM Gauge banner attached, were first to cold inflate for the press. At around 1:30pm Lindstrand Media with the Palletways Z-105 and JLL attempted to inflate along with SM Gauge, Pattersons and the Airship & Balloon Company (ABC) who had their Stuart the Minion special shape with them, attending Bristol for a second time. Surprisingly the only team that managed to fully stand the balloon up and tether was ABC. The wind was whipping through the arena at this point, but once Stuart was tethered it wasn't too bad. Sudden gusts kept hitting the Cameron-built special shape, but it was tethered for fifteen minutes. This made us a little doubtful if the launch would go ahead even though it was meant to drop out as we neared the night glow. Exclusive Ballooning had their William Hill Scottish Cup led out, built by Kubicek in 2013, but they decided against tethering. A lot later in the afternoon, the G-BGAZ team put their cold fan on for a CofA. No basket was attached. 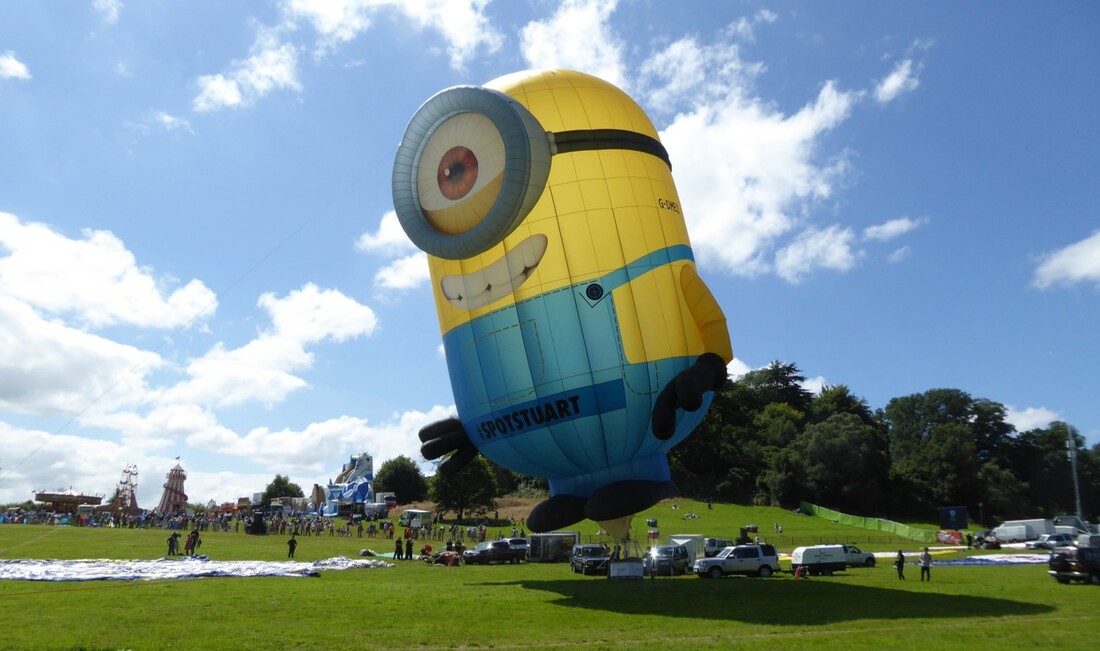 Balloons at the 2015 Fiesta